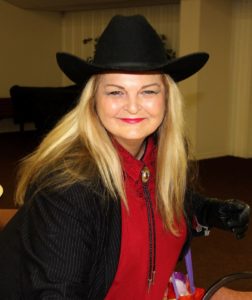 About the Author
Kathy L. Murphy (formerly Patrick) is a one-woman phenomenon in the worlds of literature, literacy, and literary promotion. Starting with one book club in a tiny Texas town, she now manages what is literally an empire of book clubs, 700-plus in the United States and
15 foreign countries…and counting!

The Faulkner Society cannot imagine a better role model for developing writers, youngsters at-risk for illiteracy, and dedicated
readers. And how is that she has accomplished so much? She makes
reading fun and she knows that no appearance is too small for her if it furthers her mission: universal literacy.

Her events are fun…women wear tiaras and their dress-up best and vie for tiara titles. And now men are getting the message that reading
can be fun, especially as part of Kathy’s book clubs she organizes for
men. And that’s especially good news since men of all ages are
the most at-risk group.

She has a natural knack for marketing her brand and she gets results.
Kathy can show others how to build their marketing platforms, too.
If you have doubts, look at her record.