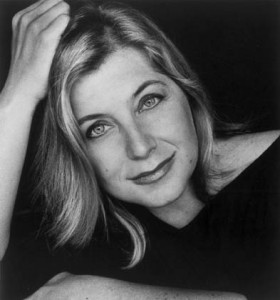 Lori Marie Carlson, Author of the new Novel
A Stitch in Air

Lori Marie Carlson’s best-selling collections of bilingual poetry, short stories, and her own novels have allowed us, as authors and readers, to live in a different world, one that appreciates the sights, sounds, and scents of different cultures in America, the challenges and achievements of growing up in a profoundly diverse and rich melting pot.
—Luis Alberto Ambroggio,  Academia Norteamericana de la Lengua Española  (North American Academy of the Spanish Language)

Lori Marie Carlson was born in Jamestown, NY. She earned her Master of Arts in Hispanic literature at her college, Indiana University and has taught at several universities, including currently at Duke University. Carlson has written several books for children and young adults, including Cool Salsa and Sol a Sol. The Sunday Tertulia was her first novel for adults. She is the widow of the late Pulitzer Prize winner Oscar Hijuelos, who had just completed a new novel, Twain & Stanley Enter Paradise, when he died while playing tennis in 2013. That novel is being released by Grand Central concurrent with Words & Music, 2015, and Lori will be presenting and signing on Oscar’s behalf at the Saturday, October 31st Literature & Lunch event: Channeling Oscar Hijuelos. When Oscar died, Lori’s own new novel, A Stitch in Air—which focuses on a group of 16th Century lace-making nuns—was just being released. In her grief, she did not pursue promoting her work. We are pleased that Lori will be presenting her own book at a special event on All Saints Day, Sunday, November 1, at the historic Ursuline Convent complex.   With her husband, Ms. Carlson, a best-selling translator, assembled and translated a collection of modern Cuban poems that they considered  most representative of what it means to be Cuban. The collection, Burnt Sugar/Caña Quemada: Contemporary Cuban Poetry, Translations and the Originals, includes the poets Severo Sarduy, Heberto Padilla, Angel Cuadra, Fayad Jamis, Rita Geada, José Kozer, Emilio Ballagas and many more. Many of these poems had never been translated into English and, together they “produce a vibrant, satisfying sound and vivid imagery.” Ms. Carlson translated and edited bilingual collections,  such as Red Hot Salsa: Being Young and Latino in the United States (2005) and Cool Salsa (1994).

About Her New Novel
Long a venerable monastery, the Convent of Saint Margaret in Granada is known throughout Spain for its production of the most exquisite laces of the time, the laces that robed dukes and counts, princesses, and even the king and queen of Castile. Set in the 16th century against the backdrop of Andalusian Christian, Jewish, and Islamic influences, A Stitch in Air is a love story involving Hernán de Vigo, a priest/playwright, and an earnest nun named Adela. Unbeknownst to the sisterhood, de Vigo has been sent by the Holy Office of the Church (the leadership of the Inquisition) to Saint Margaret to explore claims of heresy. Under the guise of playwright, he investigates these claims. He writes and directs two comedias during his stay and casts the sisters in his plays. Mystical and mysterious events occur along the way, among them miracles seemingly arranged by the Virgin Mary. The first American novel to treat conventual life in Spain, A Stitch in Air is a tribute to The Golden Age, as well as a humorous and inspirational tale of love, hope, and faith.