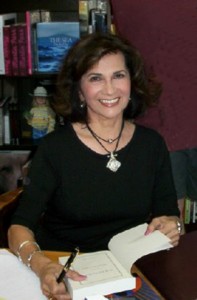 Mary Helen Lagasse, author of the
new novel, Naval of the Moon.

Mary Helen Lagasse, author of the new novel, Naval of the Moon, published her first novel in 2004. That debut novel,  The Fifth Sun (Curbstone Books; 2004), won the Miguel Marmol Prize, Premio Atzlan Award, the 2005 Independent Publishers Best Multicultural Fiction Award, and 2005  ForeWord Magazine’s Book of the Year Award. Her stories and articles have appeared in numerous publications, including the  New Orleans Times Picayune and  New Orleans Magazine. She lives in her native New Orleans.

About Naval of the Moon

A freelance writer and journalist, Vicenta “Vicky” Lumiere, has moved beyond her upbringing in the diverse Irish Channel neighborhood of New Orleans. But a visit to Lonnie Cavanaugh in the Louisiana Correctional Institute for Women, a childhood friend “who became lost in the streets of the Irish Channel,” brings back a flood of memories of shared dreams, and a fateful summer long ago.
In  Navel of the Moon, the follow-up to her acclaimed debut  The Fifth Sun, Mary Helen turns to the 1960s, where a young Vicky learns that the complicated people that we become as adults and the complicated world that adults create are shaped by events in childhood. The adults around her, beginning with the Mexican grandmother, Mimy, the family storyteller—who says she is from the “navel of the moon”—often confound and sometimes trouble Vicky. Yet Vicky’s strength of character is profoundly affected by the complexity of life, and in particular that of her troubled childhood friend Lonnie.
Be Sociable, Share!