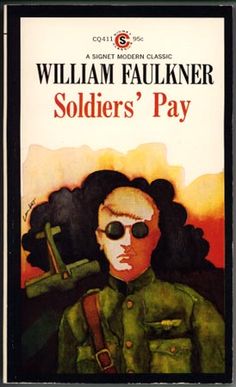 Soldiers’ Pay is the first novel published by the American author William Faulkner. It was originally published by Boni & Liveright on February 25, 1926. It is unclear if. Faulkner was working on two other manuscripts while finishing Soldiers’ Pay in
1925, while living in New Orleans on Pirate’s Alley, near Jackson Square in the
Vieux Carre.

William Faulkner was a friend and member of American writer Sherwood Anderson‘s literary circle in 1920s New Orleans. As the story goes, it was Anderson who agreed to send the Soldiers’ Pay manuscript to his publisher as long as Anderson himself did not have to read it.

In a 1950 letter from Faulkner’s lifelong friend Phil Stone to Glenn O Carey, Stone acknowledges that it was Anderson who was instrumental in getting Soldiers’ Pay published. “With all the efforts we made, I was not able to get Faulkner published and Sherwood Anderson was the one who got him started as far as publication goes.”

Horace Liveright agreed to pay Faulkner $200.00 for the manuscript, which was originally titled Mayday. The Editor-inchief at Boni & Liveright, T.R. Smith, is likely the source of the title change. The first print run of Soldiers’ Pay was 2,500 copies.

By the standards of the day, Soldiers’ Pay and his second novel Mosquitoes were commercial failures. Neither novel sold more than 1,200 copies after their initial releases. Since he was awarded the 1949 Nobel Prize for Literature, Soldiers’ Pay has remained in print, however. First edition copies are valuable among collectors, often selling for $35,000 and more.
The original manuscript of Mayday from which Soldiers’ Pay was edited was dedicated in Faulkner’s manuscript to a love interest named Helen Baird, a
New Orleans debutante, who spurned the overtures of Faulkner, even though
he persisted in pursuing her for some time.

Soldiers’ Pay was once optioned to be made into a movie by a Hollywood producer
years ago but it came to naught. Today, however, a film is in the making and star Gerald McRaney and others and is being produced by Michie Gleason.
The Plot

The plot of Soldiers’ Pay revolves around the return of a wounded aviator and his difficulties adjusting following the conclusion of the First World War.. The film opens in New Orleans and then turns to his return home to a small town in the South. He is escorted home by a veteran of the war and a widow whose husband was killed during the conflict. The aviator himself suffered a horrendous head injury, and is left in a state of almost perpetual silence, as well as blindness. Several conflicts revolving around his return include the state of his engagement to his fiancée, the desire of the widow to break the engagement to marry the dying aviator, and the romantic intrigue surrounding the fiancée who had been less than faithful to the aviator in his absence.

Soldier’s Pay is one of only a few of the author’s novels not set in his fictional Yoknapatawpha County, Mississippi.