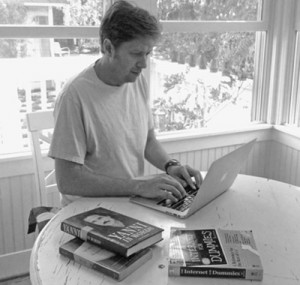 Alex Sheshunoff won the Pirate’s Alley Faulkner Society’s 2013 gold medal for best narrative non-fiction book for his manuscript, Paradise Misplaced. Sheshunoff was signed after winning by literary agent Jeff Kleinman, who judged the non-fiction book category. Jeff turned right around and sold this full-of-fun memoir to Tracy Bernstein, a senior editor at New American Library, an imprint of Penguin-Random House The book is scheduled for 2015 release. Sheshunoff, Kleinman, and Bernstein are appearing together on the Words & Music, 2014 program. Sheshunoff is a writer whose work has appeared in National Geographic Adventure, Slate.com, Marketplace on National Public Radio, The Anchorage Daily News and other, very prestigious media outlets. Before deciding to call himself a writer, Alex snuck through Yale and started and ran an internet company in New York called E-The People – a nonpartisan precursor to Moveon.org but with a pun in its name. Burnt out and facing a quarter-life crisis, Alex gathered the one hundred books he was most embarrassed not to have read in college and moved to a small island in the Pacific. He later wrote a book about the experience (Halfway Between Yap and Pig: Why Not To Buy a One-Way Ticket To a South Seas Island With Only Three Letters In Its Name) and got to rewrite the book while getting a masters degree in creative nonfiction writing from the University of Iowa. Because of his unique last name, Alex is often asked if he’s somehow related to Ian Shenanigan Sheshunoff, the first-place winner of the Diaper Derby Crawling Contest at the 2008 Alaska State Fair.  They are indeed related. Ian is his son. And they were living in Anchorage until recently. Today, Alex and his wife, Sarah, live in Ojai, CA with Ian and his equally talented younger brother, Andrew.