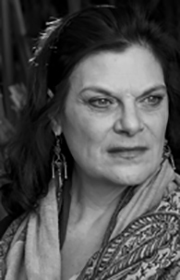 Moira Crone has published three novels and three books of stories, including What Gets Into Us. Her work appears in Oxford American, Triquarterly, Habitus, and New Orleans Review. Winner of the Faulkner Society’s gold medals for both Novella and Short Story, her stories have been selected for New Stories From The South, five times. In 2009 she received the Robert Penn Warren Award for Fiction from the Southern Fellowship of Writers for her body of work. Moira Crone is a fable maker with a musical ear, a plentitude of nerve, and an epic heart for her beleaguered, if often witty, characters. Her previous novel, The Not Yet, was published in 2012 by Lavender Ink. Her latest novel, The Ice Garden, was a Fall, 2014, release from Carolina Wren Press. The Ice Garden was originally the gold medal winning novella, which was expanded to novel length. Ms. Crone was presented with the Faulkner Society’s ALIHOT (A Legend In His/Her Own Time) Award for Fiction in 2014. In addition to her impressive body of fiction, Ms. Crone is a talented painter.