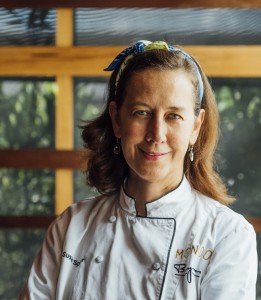 Susan Spicer began her cooking career in New Orleans as an apprentice to Chef Daniel Bonnot at the Louis XVI Restaurant in 1979. After a four-month “stage” with Chef Roland Durand (Meilleur Oeuvrier de France) at the Hotel Sofitel in Paris in 1982, she returned to New Orleans to open the 60-seat bistro Savoir Faire in the St. Charles Hotel as Chef de Cuisine. In 1985, she traveled extensively in California and Europe for six months, returning to work in the kitchen at the New Orleans Meridien Hotel’s  Henri (consultant chef, Marc Haeberlin of l’Auberge de I’ill). In 1986 she left to open the tiny Bistro at Maison de Ville in the Hotel Maison de Ville. After nearly four years as chef, she formed a partnership with Regina Keever and in the spring of 1990 opened Bayona in the French Quarter. With solid support from local diners and critics, Bayona soon earned national attention and has been featured in numerous publications. From 1997 through 1999, Susan owned and operated Spice, Inc., a specialty food market with take-out food, cooking classes and artisan bakery. This developed into Wild Flour Breads, which she currently co-owns with partner Sandy Whann.  In 2000, Susan and three partners opened Herbsaint, a casual award winning contemporary bistro-style restaurant in the Warehouse District of New Orleans. In 2008, she sold her partnership to Donald Link, but continues to be a regular patron.

Susan’s first book, entitled Crescent City Cooking: Unforgettable Recipes from Susan Spicer’s New Orleans, was released nationwide by Knopf in 2007. A year later, Crescent City Cooking was recognized by the International Association of Culinary Professionals with a nomination for Best American Cookbook, and was awarded Best New Cookbook by New Orleans Magazine. Chef Spicer’s book also was included in  Food & Wine’s 2008 Best of the Best, a collection of recipes selected from their top 25 cookbooks of the year. In May of 2010 Susan was inducted into the James Beard Who’s Who of Food and Beverage in America. Her latest project is the opening of MONDO, a casual, family style restaurant in Chef Spicer’s neighborhood of Lakeview.