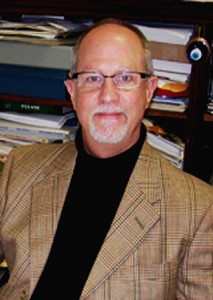 Bruce Boyd Raeburn is a jazz historian. He is curator of the Hogan Jazz Archive at Tulane University and also serves as Director of Special Collections. Bruce is the son of the big band leader Boyd Albert Raeburn, and his mother, Ginnie Powell, was a jazz singer who performed with the big bands of Raeburn, Gene Krupa, Charlie Barnet, and Harry James. Raeburn received his Ph.D. in History from Tulane in 1991 and has been the curator of the Hogan Jazz Archive since 1989. Recently, thanks to grants from the Grammy Foundation and Music Rising, the Archive has created a database making its core oral history collection available on its website. Periodically, Raeburn also teaches a jazz historiography seminar at Tulane as part of the Musical Cultures of the Gulf South curriculum created by Music Rising. In the past, he has appeared as a cast member on WWNO’s Crescent City radio show and has performed widely as a jazz and rock drummer in New Orleans for 40 years, working with Earl King, James Booker, Clark Vreeland, the Pfister Sisters, and others. Also a writer, his latest book, New Orleans Style and the Writing of American Jazz History, was published by the University of Michigan Press in 2009. We feature an excerpt in this year’s Double Dealer.