Jade Hurter, a New Jersey native, is a second year poet in the MFA program at the University of New Orleans. At 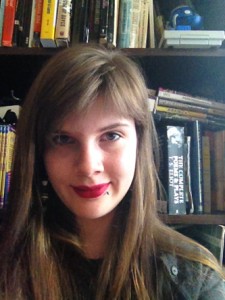 UNO she works with the Greater New Orleans Writing Project and the Scholastic Writing Awards of Southeast Louisiana. She also reads submissions for UNO’s literary journal, Bayou Magazine. She has been a two-time semifinalist in the SLS Unified Literary Contest and has received the Mona Adilman Prize for poetry. Her work is forthcoming in Quaint Magazine. This is her first year working with the Pirate’s Alley Faulkner Society and the Words & Music festival, and she is “thrilled to be a part of it!” She will be participating in the Muse on the Mississippi poetry presentation on Saturday, November 22 during Words & Music. Additionally, she has been hired by Faulkner House Books to do its blog and social media out reach and during the coming year will be assisting Faulkner Society Co-Founder Rosemary James with the 2015 William Faulkner – William Wisdom Creative Writing Competition and the 2015 edition of The Double Dealer.