M. A. Harper, a southern farmer’s daughter, was once a free-lance commercial artist. But upon her discovery that no 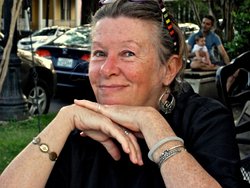 picture is always worth 1,000 words, she took the 1,000-word option and ran with it. Her published works include novels, children’s plays, nonfiction articles and the online Faint Glow Blog. Fascinated by those thin places where reality seems to give way into something Other, her fiction can be described as Supernatural Lite. Among past and present pursuits are palmistry, skydiving and metaphysics. A guilty pleasure is NFL football and her day jobs have included shoe seller, New York City window dresser, department store sales clerk and legal office receptionist. Her favorite night job was as off-Off-Broadway stage manager for many productions at La MaMa. She currently lives in New Orleans. If asked to define herself in one word, she’ll say “interested!” Her books include the very successful novels, The Worst Day of My Life, So Far and Ghost in the Bedroom, orginally released as The Year of Things Past.  M. A. is in the process of doing something most unusual; she’s writing a family saga trilogy.  Not so different? But her way is. She’s writing it backwards, with Ghost in the Bedroom being the first book in the series. The second in the series is the prequel Fire on the Bayou, being released concurrent with Words & Music, 2014 by Julie Smiths press, BooksBNimble.