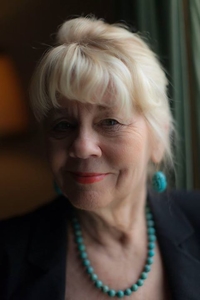 Rosemary James has had a dual career in communications and interior design. As a journalist, she started her career writing features as a high school student writing for the Pulitzer Prize wining weekly, the Myrtle Beach Sun, and then for The Charleston News & Courier/Evening Post in her hometown. Her career in New Orleans began in 1964 with the States-Item, where she covered the maritime and oil and gas industries, before being assigned to cover District Attorney Jim Garrison’s office, the courts and politics. With two other reporters at the States-Item, she broke the story that New Orleans Garrison was investigating the assassination of President John F. Kennedy and the arrest by Garrison of businessman Clay Shaw. In 1968 she moved to WWL-TV,where she again covered primarily the courts and politics. She covered the six-week trial of Clay Shaw, indicted by Garrison for conspiracy to murder the President.  In advance of the trial, she co-authored the non-fiction book, Plot or Politics? centering on the investigation. Plot or Politics? was published in 1968 and remains in print. (Recently, she was interviewed by CNN’s documentary on the 50th anniversary of the Kennedy assassination. Her political coverage included the administrations of Mayors Victor Schiro and Moon Landrieu and Governors John McKeithen and Edwin Edwards. More recently, she edited a collection of essays in the immediate aftermath of Hurricanes Katrina and Rita. The book, My New Orleans: Ballads to the Big Easy by Her Sons, Daughters, and Lovers, was published by Touchstone, an imprint of Simon & Schuster, which also remains in print. Concurrently James has owned her own interior design for 25 years.  Recent projects have included renovation and decoration of an Atlanta residence for novelist Elizabeth Dewberry, renovation and decoration of the French Quarter residence, which once was the home of the Mayor of Storyville, and the uptown residence of a prominent surgeon and concert pianist. She has been a frequent contributor to design magazines, such as Southern Accents, Traditional Home, Creative Life, Departures, and Decorating. Her own design work has been featured inSouthern Accents, Departures, The New York Times, Traditional Home, Creative Life, Decorating, Metropolitan Home and other journals. A Carolina native, Ms. James has lived and worked in New Orleans since 1964. With her husband, Joseph DeSalvo, Jr., and W. Kenneth Holditch, she is co-founder of the Pirate’s Alley Faulkner Society and the creator of Words & Music: a Literary Feast in New Orleans.  The DeSalvos are recipients of a Lifetime Achievement Award from the Louisiana Endowment for the Humanities.