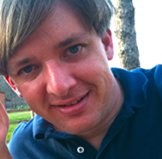 Tad Bartlett writes fiction, poetry, and essays. His photography and essays have appeared in a semi-monthly series on the website of the Oxford American, as well as in the Mobile Press-Register and the Selma Times-Journal. His short stories have been cited for Honorable Mention in the February 2013 Glimmer Train Short Story Award for New Writers, and placed as finalists in the 2012 and 2013 William Faulkner-William Wisdom Creative Writing Competition. His poetry was a finalist in the 2011 Faulkner-Wisdom competition; and an essay was a finalist in the 2010 Faulkner-Wisdom competition. Tad has undergraduate degrees in theater and writing from Spring Hill College and a law degree from Tulane University, and is currently a student in the MFA program in fiction at the Creative Writing Workshop at the University of New Orleans. Tad is a founding member of the Peauxdunque Writers Alliance, a chapter of the Words & Music Writers Alliance.